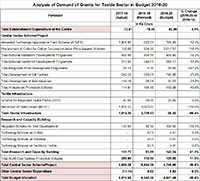 Finance Minister Nirmala Sitharaman presented her maiden budget in Modi 2.0 government. However, the textiles sector seems to have been low on her priority list as the Budget allocation for textiles has been reduced to Rs 5831.48 crore in fiscal 2019-20 from Rs 6,943.26 in the last fiscal. Total textile infrastructure like SITP has been reduced from Rs 3729.83 crores to Rs 58.55 crores. What’s more there has been a reduction in custom duty from 5 per cent to 2.5 per cent on import of raw materials under 5101 and 5105 (wool fibre and wool tops). Moreover there has been an increase in customs duty from 0 to 20 per cent for water blocking tapes for manufacture of optical fiber cables. Reacting to the budget Sanjay Jain, Chairman, CITI says, “It’s neutral and a non event.” 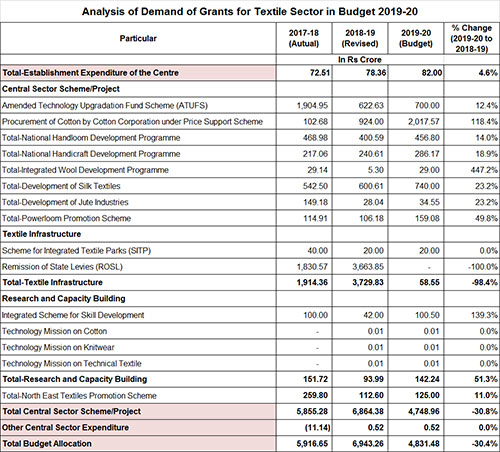 attract more overseas investments. This assumes special significance as several foreign entities had raised concerns over the mandatory local sourcing norms from India. This included the high-end technology companies who had expressed their reluctance to procure goods from India due to the difficulty in meeting the 30 per cent condition.

The Department of Promotion of Industry and Internal trade had mooted a proposal earlier this year to ease these norms. According to that proposal, these relaxations would allow retailers more time to comply with this regulation. The proposal also sought permissions for such firms to start their online operations even before setting up brick-and-mortar shops, provided they are able to attract over $1million of FDI. However, the proposal also mandated these firms to set up their brick-and-mortar shops within two years of starting their online sales.

Tarun Pathak, Research Director at Hong Kong based Counterpoint Research feels easing rules in single brand retail is likely to help many foreign companies to expand their operations by setting their own stores in the country.

The government has also focused on promoting Khadi globally, urging its missions abroad to come up with ideas to project Khadi as an employment generation solution and not merely a garment.

The Budget also announced a 2 per cent interest subvention for MSME and corporate tax reduction to MSMEs upto Rs 400 crores. Labour laws have been simplified and restructuring of power distribution has been proposed. Also the formation of National Research Foundation has been announced in the Budget.

As a part of the NDA government’s focus on bringing micro, small and medium enterprises (MSMEs) under the formal economy’s fold, a payment platform for the MSMEs will be set up. This comes in the backdrop of the government’s plan to start an e-commerce platform on the lines of Amazon and Alibaba to sell products from MSMEs and the Khadi and Village Industries Commission.

Given its focus on MSMEs, the government has also announced a pension scheme for 30 million small traders, recognising the plight of shopkeepers, small traders and the self-employed hurt by the November 2016 decision to demonetize high-value currency notes, and the much-debated roll-out of the goods and services tax (GST) in July 2017. All small shopkeepers and self-employed persons as well as the retail traders with GST turnover below Rs1.5 crore and age between 18-40 years, can enrol for this scheme. The scheme would benefit more than 3 crore small shopkeepers and traders.

Reacting to the Budget the Clothing Manufacturers Association of India (CMAI) stated it is a mixed bag for the textile and apparel industry. Rahul Mehta, President, CMAI, stated that the extension of lower rate of 25 per cent corporate tax with an annual turnover up to Rs 400 crores is a welcome step. Currently, this rate is only applicable to companies having annual turnover up to Rs 250 crore. Moreover the infusion of Rs 70,000 crore capital into public sector banks will ease the current credit squeeze. Also, Rs 350 crore allocated for 2 per cent interest subvention for all GST-registered MSMEs on fresh or incremental loans will give a big thrust to MSMEs. Considering that over 80 per cent of the domestic apparel industry is in the MSME sector, all these measures could provide a boost to the sector.

A study conducted by Facebook India and Boston Consulting Group recently recorded the sharpest surge in e-commerce adoption across multiple categories in India compared to other markets, including China, Brazil,... Read more

Retailers of around 350 brands including DLF, Ambience Nexus, Pacific Group, Oberoi, Mantri have threatened to shutter outlets in shopping centres if their demands for rent-waivers and new rental agreements... Read more

Euromonitor India predicts, children’s wear market for ages 0-14 years in the country is projected to grow at a compounded annual rate of 17.9 per cent from 2018 to 2023.... Read more

For any retailer, it is important to be compassionate towards consumer’s thoughts and feelings. With this in focus, LIVA, an ingredient fabric brand from the Aditya Birla Group alongwith MRM,... Read more

The Clothing Manufacturers Association of India (CMAI) has written to the Minister of Textiles Smriti Zubin Irani, and the Minister of Commerce and Industry Piyush Goyal to consider levying a... Read more

A report titled, ‘Activewear Market in India 2019’ by ResearchAndMarkets.com, says the activewear market is estimated to reach Rs 997.8 billion by 2024, expanding at a CAGR of ~13.59 per... Read more

Indian apparel players gear up for the new normal

With the pandemic impacting both apparel manufacturers and retailers in India, these industry players are preparing themselves for the new normal. Speaking at a recent webinar by the Retail Association... Read more

CMAI has welcomed the measures announced by Nirmala Sitharaman, Finance Minister, especially those connected with the Government’s support to the MSME Sector – on which she focused on today. According to... Read more