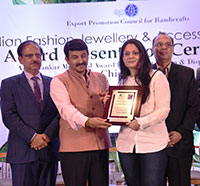 The 12th edition of the Indian Fashion Jewellery Accessories Show, presented the Ajay Shankar Memorial Awards for the best design and display stands. The show is currently being held at India Expo Centre & Mart in Greater Noida.

The awards were given in two categories i.e. Fashion Jewellery and Fashion 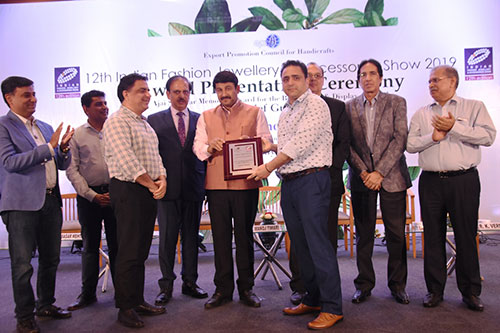 Accessories. One gold, two silver and two bronze awards were given in both the categories.

The Ajay Shankar Memorial Awards were instituted in the memory of late Ajay Shankar, former Development Commissioner (Handicrafts) who was one of the major motivators for establishing this fair.

Tiwari expressed his delight at the range of jewelry and accessories displayed at the show. According to him, the handicrafts sector is not only increasing exports from the country but also creating employment for a large number of artisans and craftsperson.

He further said that the arts and crafts of India are known from the ancient time for intricate workmanship, exquisite nature and exclusive designs. Each state of India have distinct nature of arts and crafts produced at the village level for many centuries. More than 70 lakhs artisans engaged in producing various types of items are the backbone of the handicrafts sector.

A study conducted by Facebook India and Boston Consulting Group recently recorded the sharpest surge in e-commerce adoption across multiple categories in India compared to other markets, including China, Brazil,... Read more

Retailers of around 350 brands including DLF, Ambience Nexus, Pacific Group, Oberoi, Mantri have threatened to shutter outlets in shopping centres if their demands for rent-waivers and new rental agreements... Read more

Euromonitor India predicts, children’s wear market for ages 0-14 years in the country is projected to grow at a compounded annual rate of 17.9 per cent from 2018 to 2023.... Read more

For any retailer, it is important to be compassionate towards consumer’s thoughts and feelings. With this in focus, LIVA, an ingredient fabric brand from the Aditya Birla Group alongwith MRM,... Read more

The Clothing Manufacturers Association of India (CMAI) has written to the Minister of Textiles Smriti Zubin Irani, and the Minister of Commerce and Industry Piyush Goyal to consider levying a... Read more

A report titled, ‘Activewear Market in India 2019’ by ResearchAndMarkets.com, says the activewear market is estimated to reach Rs 997.8 billion by 2024, expanding at a CAGR of ~13.59 per... Read more

Indian apparel players gear up for the new normal

With the pandemic impacting both apparel manufacturers and retailers in India, these industry players are preparing themselves for the new normal. Speaking at a recent webinar by the Retail Association... Read more

CMAI has welcomed the measures announced by Nirmala Sitharaman, Finance Minister, especially those connected with the Government’s support to the MSME Sector – on which she focused on today. According to... Read more